Sunkoshi River Rafting is one of the longest river trips in Nepal, and also rated as one of the top ten river expeditions in the world.You will raft on forested valleys and white sandy beaches. Sun Koshi in Nepali means River of gold. The big rapids, warm water, beautiful scenery and great camping make Sunkoshi river a classic multi day river rafting in Nepal.The trip ends at Chatara, an interesting confluence of three of the major rivers of Eastern Nepal such as Sunkoshi, Tamor and Arun. Sunkoshi river rafting is an ideal river for novices as it has no big and challenging rapids. Sunkoshi river is a favorite trip for kayaking and rafting in Nepal.The ever changing scenery, small isolated villages and gushing rivers are the best part of rafting in Sunkoshi River. If you want to experience of class 3 to 5 rapids and beautiful mountain scenery and landscapes, Sunkoshi river rafting is the best options for it. For booking and inquiry, the rafting package in Sunkoshi river Nepal, please email us at [email protected] and call or message on What Apps +977 9851023742. 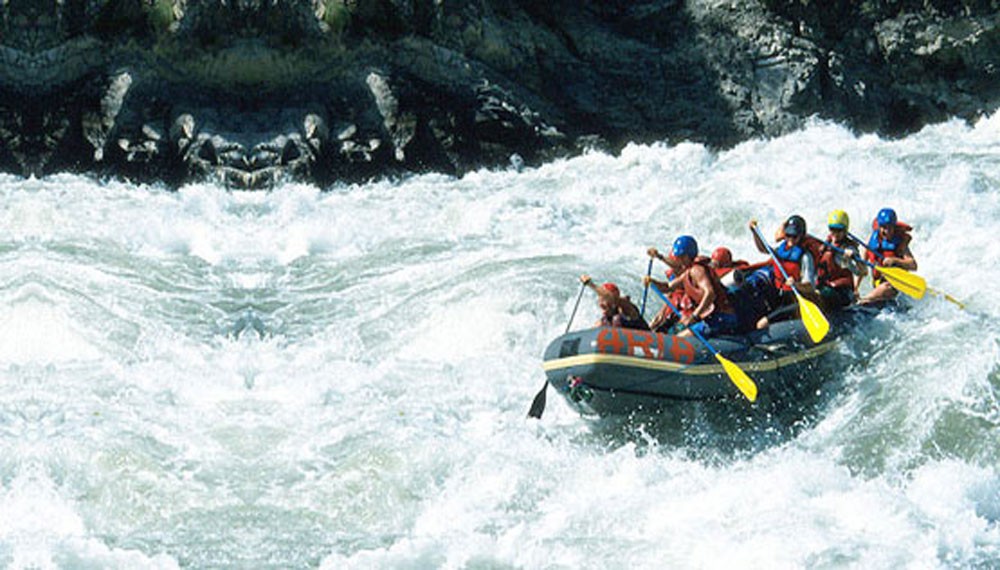 Rafting Season: All year round.

Sunkoshi river rafting is one of the top ten river rafting in the world. Rafting in Sunkoshi is perfect spot for white water rafting lovers. We raft 270km distance through the Himalaya.The River of Gold, named after the gold that is panned from its banks and the color of the water, the Sun Koshi River Rafting offers world class rafting expeditions. There aren’t many rivers where you can spend 8 days rafting the same river. Through your journey you’ll paddle between the towering peaks of the Himalayan foothills, through raging rapids, jungle corridors and finally emerging into the Teri lowlands on the Indian boarder. The Sun Koshi has been mentioned in both, The National Geographic’s and Lonely Planet’s lists of the Top 10 places to raft in the world. So if you’re looking for a unique, expedition packed full of Whitewater, the Sun Koshi River Rafting Package is where you need to be going.

The rafting section of this river starts in the center of Nepal, and you’ll follow the river east until it reaches the boarder with India in the far south east of the country. Over the 8 days you’ll travel a whopping 260km. This is a large volume river. It has one of the largest drainage basins within Nepal, collecting virtually all the water from Eastern Nepal and from the highest mountains on earth, the Himalaya’s. This means that even though the put in point could be 100 cumecs the main rapids a few days downstream could be 400 cumecs and the take out up to 800 cumecs – and this is in November, not even flood season.

The Sun Kosi River Rafting  has lots of flat sections, but also has some great rapids spread throughout its journey. This is one of the reasons that makes it such an amazing rafting trip. It allows for lots of time to try out guiding the raft, paddle a safety kayak, time to soak in the scenery as well as riding the rapids. The closer to the Monsoon you are the bigger and scarier the rapids get. Only with the right crew could the Sun Koshi be attempted with during the Monsoon season, right up to September. It’s definitely not for beginners during monsoon season. The winter season December through to March will be very disappointing for those after good rapids. The river loses a lot of its volume and the white-water aspects that gives it its notoriety become unimpressive. April and May bring melt water to rise levels again but they will still be pretty mellow So to make the most of it, get to the river September – December for good rapids and good times.

Day 1: Pachuwarghat (541 m)
After breakfast, early in the morning, we will leave for our put in point Dolalghat. Before the rafting starts, our guides will give you instructions on how to use equipment and tips on how to remain safe. In Dolalghat, lower Bhotekoshi meets Indrawati and forms the Sun Koshi River. We will start to raft on Sun Koshi (“the river of gold” in Nepali). The start will be smooth with few rapids, which will give us some practice and warm up for the rapids that are yet to come. Towards the end of the day, you will experience the first of many Class III rapids. We will set up our camp at Pachuwarghat for the night’s rest. When the night falls we will be setting up campfire. While basking on the warmth of the campfire, we will have little chit chats. We will share our own stories and if you are happy with sharing your own stories, you can do so too.
Day 2: Chainpur (1,206 m)
After breakfast, early in the morning, we will start from Pachuwarghat to reach Chainpur. We will be facing couple of exciting Class II and Class III Sun Koshi rapids. However, as we raft, you must take your time and observe the beautiful Nepalese countryside. When we reach the Hindu holy temple Kusheswor, the BP highway starts to run parallel to our rafting route. As we continue rafting down the river, you will see Majhee Gaun (which means fisher’s village in Nepali). True to its name, the inhabitants of this village make a living by catching fish. By the time we reach Chainpur, it will be evening so we will set our camp at Chainpur by the side of Sun Koshi River. As you rest and loosen yourself, our team will be prepare tasty food. After our meal, before sleeping, we will have some time for ourselves. We are open to all feasible ideas – that entertain or inform us.
Day 3: Jhagare (1,190 m)
This will be another exciting day for us. After breakfast, we start to paddle down Sun Koshi. Within a short period of time, we will see Tama Koshi joining Sun Koshi, increasing the volume of Sun Koshi. At first, the waters are quite calm and paddling is easy but slowly the water currents of Sun Koshi increase, and we have to pay our attention to paddling. The highlights for this day are the exciting and challenging rapids, that include Meat Grinder (Class IV-), Punch (Class IV-), Judy (Class III), Pre-anxiety (Class III) and High-anxiety (Class IV-). As the evening approaches, we will stop rafting and set a camp at Jhagare.
Day 4: Raighat (268 m)
Day eight will test our team spirit as we will come across the famous Harkapur I and II (Class V-) rapids. After some paddling, we will see Dudh Koshi, join Sun Koshi. Depending on the season and water levels, the rapids may or may not be runnable. We'll make a careful group decision, as we always put safety first. Our camp site for the day will be at the beautiful Raighat beach for a much-needed rest and refreshment.
Day 5: Rasuwaghat (501 m)
After breakfast, we will start rafting again and we will meet some exciting rapids such as Jaws Rapid (Class IV-) followed by the notorious “Dead Man Eddy”. The main highlight of this day’s rafting is the rapid “Rhino Rock” (Class IV). True to its name, this rapid looks like the horn of a rhinoceros. The way we pass this rapid depends on level of water and decision by the guide. We will set up our camp for the night at Rasuwaghat by the Sun Koshi riverside.
Day 6: Waterfall
As we continue rafting down the river, we will enter tropical vegetation. Sun Koshi becomes narrower, and we will be passing through a region referred as “Jungle Corridor” which is full of continuous rapids. As we move ahead, we come across a series of waterfalls – un-spoilt and serene. This day’s camp will be near to Waterfall by the side of Sun Koshi.
Day 7: Tribeni
The waters of Sun Koshi are calmer now. We can relax as we pass through smaller waves. However, on the way, we will come across two exciting rapids – Big Dipper (Class IV) followed by Black hole (Class III). Soon, Arun and Tamor mix with Sun Koshi at Tribeni (which means confluence of three rivers in Nepali). A total of seven rivers have now joined Sun Koshi and it is now called Sapta (which in Nepali means seven) Koshi. Our camp at that day will be at Tribeni.
Day 8: Chatara (153 m) to Kathmandu
After breakfast, we will raft for some time until we reach the famous Baraha temple. We will spend some time sightseeing, then we will paddle to Chatara – our final put out point. We will have our lunch at a local restaurant. From Chatara, we will take a private bus and drive for about 14 to 15 hours to reach Kathmandu. We will stop our bus on the way for dinner at a Nepali restaurant. You can choose to stop at Chitwan National Park to enjoy the wildlife. There is one more option, you may go to Biratnagar from Chatara and then fly to Kathmandu. If you want to do so, please mention it during the time of your trip booking. 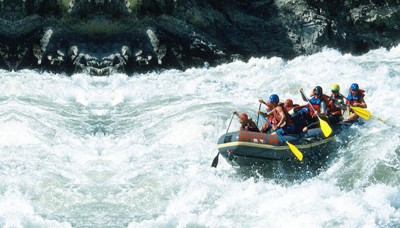